The best recycling is the avoidance. So if we produce products which will getting older than 60 years and even then still can be repaired, then we have avoided more CO² than with all other experiments, where the products are aimed to be produced in massproduction again, to realize constantly increasing profits, because this is again, showering without getting wet.

The materials for that are above all metals, ceramics and wood.

With that we can produce almost all products are usually used in the household.

The top priority is that it is not allowed, materials, whether solid, liquid or gaseous, to enter nature, which are not occur in nature. Also, no plastic, rubber, silicones, exhaust fumes of all kinds, no micro-particles, no poisons, so no pesticides, anti-fungal agents, solvents, hydrocarbons, gasoline, oils, fats and the like. Above all, no heavy metals, nickel, zinc, cadmium, lead and so on. For example is tire abrasion a very big problem.

The same applies here; the best recycling is the avoidance. So substitutes and methods have to be found for these things that are not recyclable because tire abrasion can not be recycled and it is difficult to collect, it therefore contaminates nature, passes through the food chain, gets that way in our body and that is bodily injury. This is strictly prohibited and will lead to an indictment. The removal of substances from nature is very, very expensive, which is not included in the, at the moment, so cheap prices. It has to be hard-acted here, the prices were to low and the profits were too high, both parties, producer and customer have to pay for the cleaning afterworth.

How should recycling be done?

Of course NOT by simple shred, grind and down cycling because in the end of this chain remains a stuff for the stove, poison gets into the environment when burned, which is strictly prohibited. The melting out of valuable metals from telephones and PCs also causes such a poisonous burn, that is body injury.

All substances must be dissect at the atomic level and returned as elements to the production process.

All this can not be done under a capitalist system. For here is NOTHING subordinate to the health of the people, as it is written  in most of the basic laws of the countries but only the maximization of profits. The capitalist system has led to what is now.

We should have thought of that from the beginning. The governments, which bear the responsibility for the health of the population, should not have allowed products that can not be fully recovered back in the end.

What people want and would like to have is not up for debate. It can only be wanted or be had, which does not damage other creatures. If that is not the case, we can also hand out handguns again, allow murder and manslaughter, but therefore set certain limits. Who is killing two or three beings is in the range of limit, after it, it costs 30 Dollar per being.

I use these images with full intention to show how pointless we are acting still at the moment.

We can not just put things together but also disassemble them. This is of course possible. The company Hoechst AG in Germany wanted to accomplish this. I know it because I was directly involved in it. The laboratories were already standing and were completely furnished. Especially in the early years of the German “Social market economy”, this would have been still possible. 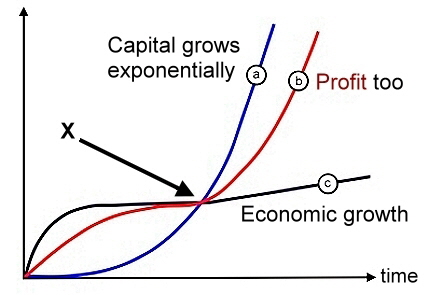 But exactly at the point X of the development chart, profit must be decoupled from growth due to capital development. This automatically leads to the cessation of any innovation. Therefore, capitalism is a real barrier to innovation after reaching saturation. Because the German so called social market economy was not a real social market economy and even the little bit, whatever was social there, prematurely dismantled any research in this regard was stopped. Instead, they digging for new resources every where, in poor countries and on the seabed. Innovations apply in the capitalism, the so-called free market economy, which, however, we can see, is not at all a free economy, as a high-risk investment. It means a made investment has to throw off even more rent and this is only possible if even higher profits can be achieved. A vicious circle, whose interruption is only possible if the raw materials are scarce or the legislator demands that the toxic waste of the production should no longer simply be led into rivers or thrown around in the area or buried somewhere. That's one of the reasons why they want to go to the moon again and now to the Mars. In order to mine there from raw materials which are slowly becoming scarce. These are the rare materials for the production of electronics. That's just one reason, the other is warfare from space. The other way to escape the end point of the capitalism. Because every crash is no chance, but leads to even greater concentration of capital in the few winners of the crash, which makes further economic activities very difficult or even impossible. Only a complete destroying and devaluation of all assets creates a real new need and a fresh start.