What is a real team and what kind of leadership stile we use?

This leadership style has a clear separation in decision-making. The manager decides for himself and only tells the employee the decision. Therefore, employees have no discretion here. Violators and self made decisions are usually punished.

Not much different is this style of leadership. The supervisor practically "sells" his decision here. If there is resistance in the team, the decision is still enforced by the supervisor. Also here, punishment measures against self-thinkers are the rule.

The employees have not really more to say in a hierarchical management style. Because now the manager proposes only one decision, which, however, can be changed sometimes. This means that if a team member does not agree at all, it can make an improvement suggestion. But if this proposal does not fit into certain pre-made frameworks, it will be ignore.


In these first three styles of leadership thinking and decision-making is largely done by one person. If this person makes one or more mistakes, the whole group may be affected. The despotic style of leadership is still used today mostly in the military leadership, although it has often been shown that it came to high losses due to final decision errors of the commander-in-chief. The dictatorship is also part of this kind of leadership. The patriarchal style of leadership has been used in most 19th-century firms, but is still often used today, although in the past, again and again, it has proved utterly useless. The hierarchical style of leadership is the most widespread, practically almost all modern companies and also governments work on this principle. An authoritative leader or a group of executives makes decisions which are then delegated down. Small improvements are usually only allowed if they do not question the basic direction of the decision. In all of these leadership styles, instead of the reasons for mistakes, a culprit is sought. The true mistakes remain so mostly or undetected for a long time and therefore repeat themselves again and again. There is very little or no response to sudden changes in external conditions, much needed changes, new thinkings and innovations are inhibited or completely prevented. In addition, if the command recipient receives little or no room for their own ideas and decisions, possibly having to reckon with punishment or bullying, therfore he withdraws internally completely from the process and so it does not come to necessary improvements, inventions or innovations.

With this style of leadership, the employees already have a lot of room for decision-making. The manager merely presents the requirements or goals of a project and the entire team then looks for possible solutions. Only then does the manager make the decision.

Very similar, the decision-making process is based on a cooperative leadership style.First, the manager sets the framework, then the team looks for solutions and then makes the decision itself. This means that there is a lot of responsibility for the employees and external control by the manager is largely replaced by self-control.

In this case, employees may act freely, within systemic limits.This means the entire decision-making power lies with the employees, but also the associated responsibility.

Here, in these latter styles of leadership, not only a person makes the decision, but also the thought work is distributed among several heads, several proposals can arise, which can then be decided in the democratic sense.
The employees or even the citizen has a scope for their own cooperation and he is encouraged to bring in his ideas fully. Studies show that people not only expect this, they need it. Not only outstanding  competence is required for a successful leadership but also a credible attention, constructive guidelines and a motivating way. These are skills that only very few people naturally possess - the great rest has to learn. Understanding how to excite people from within, this is the true art of successful leadership.


A real and really successful team

However, to form a truly successful team, some more is needed. For one thing,  the tradition of the "guilty guys" must finding an end. This is very difficult and must be learned by the whole team. Instead of searching for guilty parties and punishing them, the mistake must be analysed and advised on how to eliminate or circumvent it. Than, the team leader must be chosen by the team and, if he is unsuccessful, he can be voted out at any time. Further the team has to learn more, it has to master the non-violent communication. Within this trainable language, no accusations are made, but always spoken about one's own feelings. In this way, dispute is replaced by understanding. If there are no more guilty parties then the fears of punishment, bullying, failure, and making one's own decisions sink. Since there is only a very flat hierarchy employees and leadership meet at eye level, so that eliminates the competition with his, for the overall success disturbing small fight activities that have nothing, but not the least bit with the task or the project to do. Competition only consumes the inner energy of a company and often leads to failure or inadequate execution of the project.


Apollo 13 an example of a successful team

Apollo 13 was a space mission of the US Apollo program in April 1970. After the explosion of an oxygen tank during the flight to the moon the planned moon landing had to be abandoned. Technical improvisation and a fully capable, collaborative team at all levels was needed to bring the three crew members back to Earth alive in their damaged spacecraft. For this purpose, all management positions were lifted. Half a century later, the Apollo 13 mission is still a prime example of successful team leadership and resource management in extreme situations. Such teamwork is the prerequisite for every successful mission. Legend has it that the cleaning lady was the one who found the solution for using square filters in round openings: "I would stuff a wet rag in it ..." she is supposed to have said.
Unfortunately, this excellent team work was denigrated by the same named film by Ron Howard with Tom Hanks, as in the movie Tom Hanks took over the role of the hero, who, however, did not exist at all. The real heroes were the team on the ground. It was clear, however, that such a functioning team should not be an example for the economy and attracts no visitors in the cinema halls. The ever-propagated hero who acts in selfish self-esteem and on which the whole world is already classically conditioned. As already mentioned, new findings are often prevented and / or deliberately eliminated.

Who is to blame for the 2008 financial crisis?

This sentence is about an article of a person who should not be mentioned here. It's all about the tenor with which this problem was addressed.It was first searched for culprits.In this approximately forty-page analysis of the possible culprits are called in the course of some banks and politicians, it statistics and figures were shown by various banks, in short, the alleged culprits were exposed and denounced.

The reason, however, why it even came to it, was not disclosed.

The real reason to say the baseline error remained hidden in the dark.He is still not discovered and not resolved.However, it is the same reason which was responsible for the so-called tulip mania in 1637.

What do tulips have to do with a team? 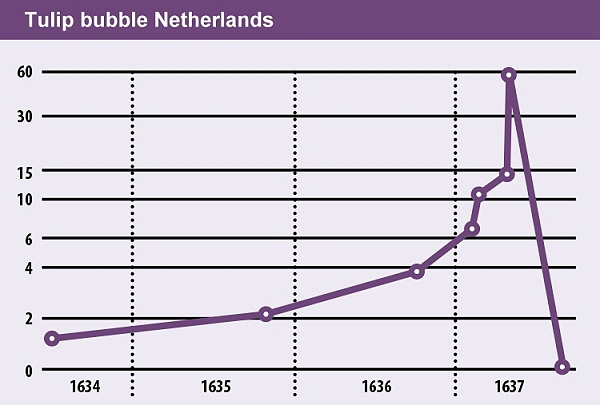 To whom this chart is now familiar is either stockbroker, scientist or has looked at my graphics on the page: "Economiy". The special thing about this spectacular crisis was that it involved only the richest people of the time, from counties to royalty, fiercely competing for the most beautiful gardens. A competition so to the bitter end, because in the end even the richest could not pay the exponentially grown prices. This crisis plunged the most powerful houses into bankruptcy and made various lenders very, very rich in the long term. Unfortunately, as in any crisis, the poor people at the end had to pay the bill through her bloody hands work. However, this first stock-crisis also led to a certain stock exchange regulation, which did not prevent the next crisis, the so-called Mississippi bubble 1718. All further crises were not prevented and the financial crisis of 2008 could neither be predicted nor prevented. Although all crises show the same pattern again and again. The respective financial experts asserted and affirmed repeatedly, until shortly before the total crash, that there was no crisis.

We need a real Team and a new plan

To this day, the leading politicians and so-called financial experts claim they are the professionals, have everything under control, they would run a successful fiscal policy, the culprits were eliminated and there could be no more crisis. But as the numbers show, the 2008 financial crisis was not eliminated at all but only covered with printed money. Furthermore, we are in a permanent global crisis from who there is no escape. This is mainly because the basic mistake is not eliminated. Our high society is a pooling of selfish narcissistic heroes who are neither team nor capable of learning. If such a crisis happens, the guilty party is quickly found and the true mistake is quickly and deliberately covered up. There are some regulations introduced which are taken back over time. The profiteers of this act enjoy this and even support it. So the mistake always remains in the dark and they keeps on the ball. A real team would have long since recognized and eliminated not only this error but also the overlying affect, namely the overproduction and mass combustion of fossils by transporting the masses of goods and toilers. De facto, neither our governments nor the rich themselves are any form of team, nor were are they ever successful. These groups of people are losers who hide their huge inferiority complex behind power and wealth and thus drag the whole world into the abyss. So the world needs a real team that cares to put an end to it.