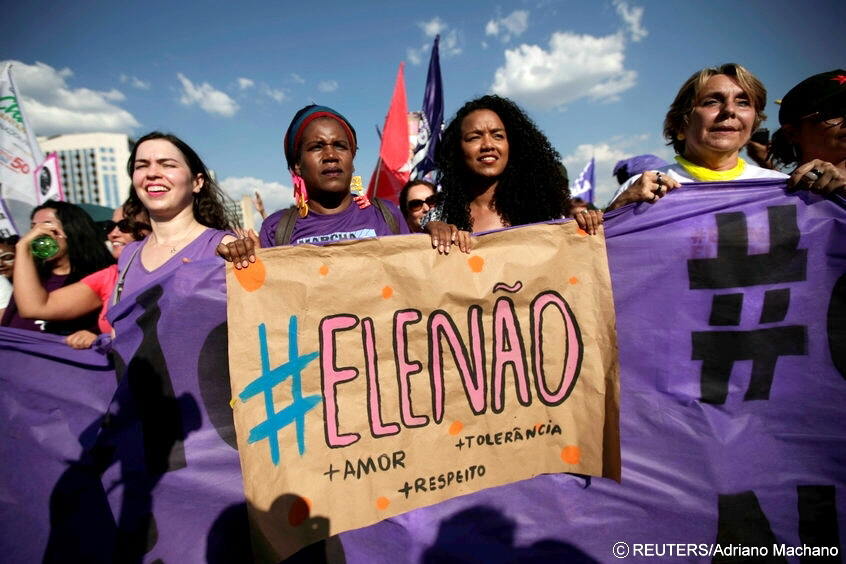 "Ele não!" - "Him not": Tens of thousands of Brazilian women demonstrating against the misogynist and racist candidate Jair Bolsonaro before the presidential election in September 2018. Nevertheless, a majority of voters voted for him. For the opponents women of the fight is now in the next round.

Power-owner-ship-strive and oppression as a sign of a suspected inferiority.

Let's start where the situation is very bad right now, in Brazil. There, women are killed by their husbands. Mostly out of jealousy. So an inferiority complex, the men there. Of course, this inferiority complex does not exist only in Brazil. That is why this worldwide desire for possession.  The woman as property, as a valuable object, which should emphasize the social position of the man. If the woman turns away from the man, for whatever reason, his value is diminished, his social position endangered. Power-owner-ship-strive and oppression is a sign of an inferiority-complex.

Often, these men are mistakenly assumed a particularly high love potential. But love, is this phenomenon certainly not. On the contrary, this is just about possession, exercise of power or simply macho posturing. Where "macho" actually means "masculine", but in such behavior I can not recognize anything masculine.

But as we look around the world, it quickly becomes clear that women have been suppressed for a long time almost all over the world, almost as if they were kept as pets without any rights. Later on, they were allowed to vote, and even later to actively participate in politics and to be elected. That was not so long ago. On average in the middle of the nineteenth century.

Even today, women almost all over the world earn far less than men in comparable positions; current example right now was the ranking of the most earning actors, the women were once again far behind.

Exactly at these points may be pointed to the sexual touching or grabbing, sexual coercion and harassment in this industry which is now only really come to light. Even famous and highly regarded opera stars were obviously involved in such abnormal, diseased customs.

In Europe, there is now the so-called quota, a thorn in my eyes, because it is a shame that equality must be politically demanded and not by itself. I wonder what men are so scared of?

I can already imagine it. Because when I think so special about my studies, I remember again and again that I could always rely on my women, with the men, this was not the case at all.  I always preferred to work with women, because of the much better reliability, a much better performance and the top teamwork.

Therefore, women, I think, should be much more involved, if not completely, in the power base of governments. I think things would be much better then.

And if they had always been into the Governments, I think so too, we would not be in this pitiful situation today.

Just now shows us the last super dumbheads on God's earth how men can ruin it the best, their ridiculous appearance is a shame for all men and I can only hope that these failures of nature quickly disappear from the political arena so that the world found back to the peace process.